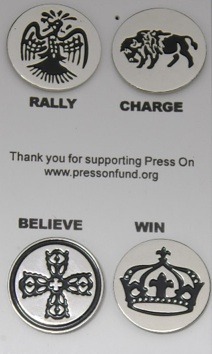 Designed by artist Cary Calhoun, the Press On Ball Markers are the perfect way to show your support for Press On to CURE Childhood Cancer while providing the recipient with the extra power to Press On.

Cross: Erin approached Cary about the idea of a Press On Charm, and Cary immediately put her creative genius to work. The ladies discussed several ideas and decided to have Cary make a cast of a Celtic cross button that Cary found at an antique market. The Celtic cross seemed like the perfect first charm, allowing the purchaser the freedom to invest whatever level of religious meaning in it that they wished. The golfer will want to use the cross ball marker to betray faithful strategy drawing on the player’s belief that his or her game is sound.

Crown: In ancient cultures, crowns represent victory, courage, and honor. A crown is a visible sign of success, thus the term “crowning achievement,” and its significance makes bearing the crown a great honor. To that end, Cary designed a crown as an image of courage and success in the fight against childhood cancer. The crown will be used by the golfer who has a firm lead and needs to maintain his or her superiority.

Bird: Patrick is known for his love of all animals, but especially birds. One evening, Cary brought over several images of birds for Patrick to see. Patrick loved the image seen on Press On’s bird charm the best. Some see a Phoenix rising in this charm and others see a noble Eagle. On the days when lady luck has not been on the golfer’s side, the image of the rising Phoenix may be just the one needed to resurrect a bad round.

Buffalo: Erin once read that when a lightning storm approaches a herd of animals, each species has its own reaction. Cows run away from the storm, and many are killed by the ensuing lightning. Buffalo, on the other hand, charge the storm and have a better survival rate. An outstanding example of the power of Pressing On! When Erin told Cary this story, Cary worked with Atlanta artist Kathryn Denson to draw the buffalo pictured on the charm which was then transferred onto the charm for production. The buffalo ball marker will be used by the player slightly behind the lead or his or her own personal goal to signal to the world that now is the time to charge!

Category: Collectibles.
Warning: sizeof(): Parameter must be an array or an object that implements Countable in /home/customer/www/pressonfund.org/public_html/wp-content/themes/presson2014/woocommerce/single-product/meta.php on line 26