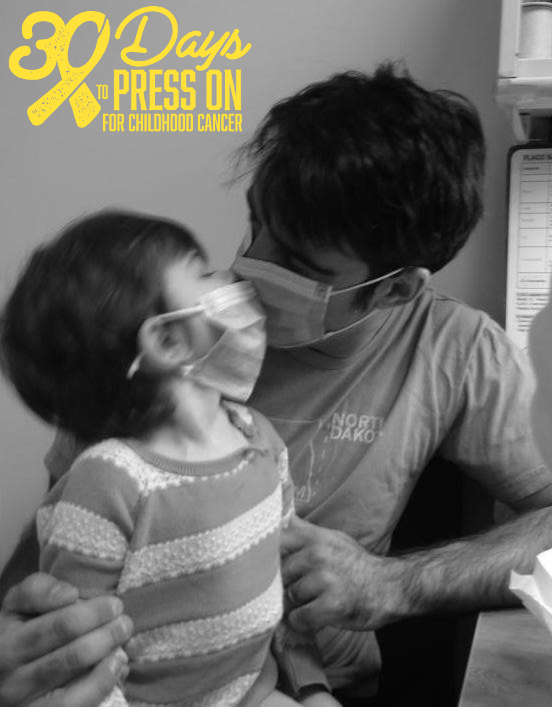 What many outside the cancer world don’t realize is just how difficult some brain tumors can be to diagnose. Today, Hallie’s father Bob recounts their diagnosis journey ~ something that took place over the course of nearly four years.

One thing I’ve learned over the past six years is that diagnosing pediatric brain tumors isn’t an exact science. Before Hallie presented with her tumor, I knew nothing about them. To this day, I still don’t really consider myself a science person, but that doesn’t matter; you have to learn fast when your child is in the midst of a life-or-death situation. After Hallie’s first surgery, the neurosurgeon explained to me and my wife, that Hallie’s tumor was so large that, when he made the first incision, the tumor oozed out of her skull. This was my graphic and unwanted initiation into the world of brain tumors. 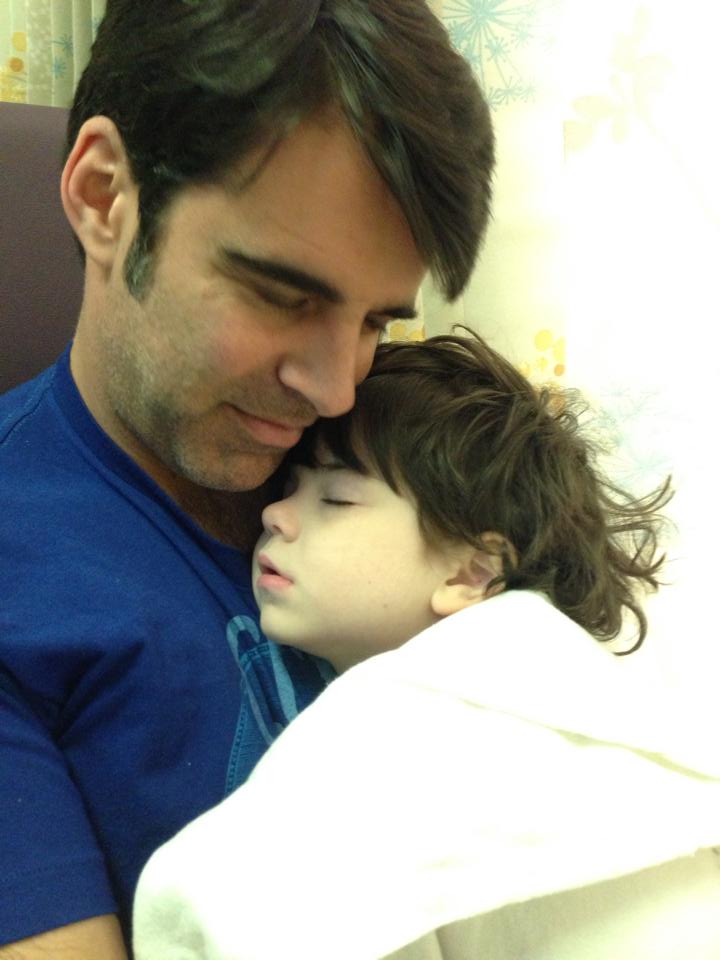 It took us a couple of weeks to get an initial diagnosis, and, when we finally did it was terrible: anaplastic ependymoma. These tumors usually appear in the back of the brain, the posterior fossa, and they are known to be very aggressive, often spreading to the spine. Hallie’s however, was supratentorial; think top-right-side. When the pathologist was explaining Hallie’s diagnosis to us, he just shook his head. Without any forethought, I asked him, “What are her odds?” The one question I’d learned from a lifetime of watching network television medical dramas. He politely dismissed my question by saying that they really didn’t focus on such things, but that the survival rates are low. Considering the trauma and strokes she’d endured during and after surgery, the pathologist advised us to prepare ourselves for the worst. The pathologist’s report was another major blow at a time when we seemed to experience one every couple of days. Reflecting on this several months later, I asked my wife, “How did we survive hearing the news?” As only she could, she said, “We didn’t believe it.” One thing the report did inspire us to do was get a second opinion from St. Jude Children’s Research Hospital in Memphis, and Dana-Farber Cancer Institute in Boston. 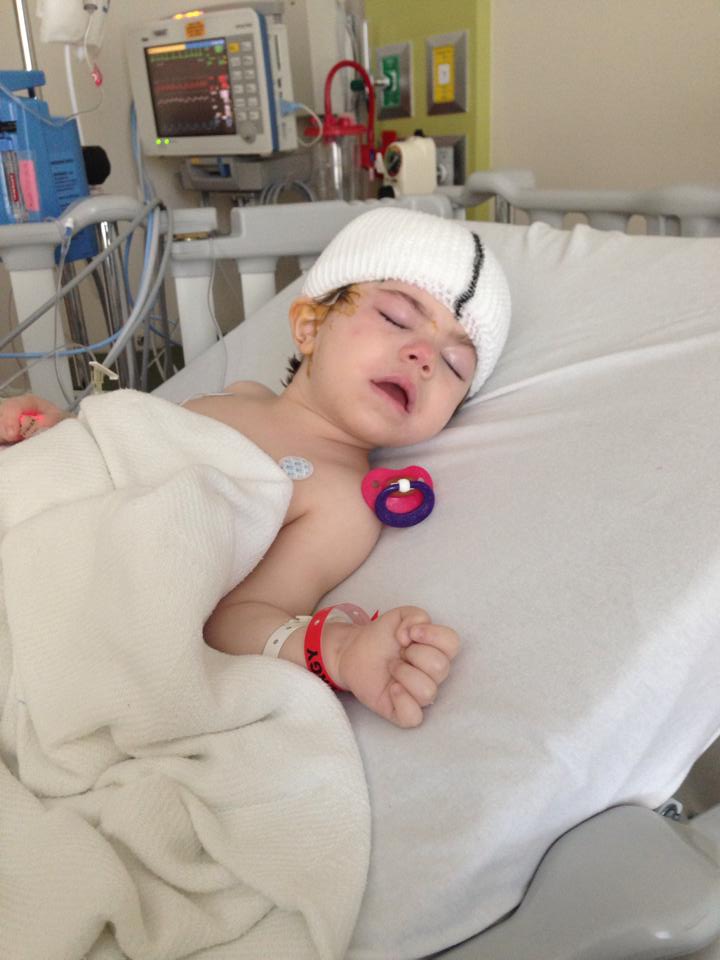 Hallie after the surgery to remove her relapsed tumor

In the meantime, our plan was to enroll Hallie in a pediatric brain tumor study offered by the Children’s Oncology Group. The protocol would consist of proton radiation therapy, and was based in Jacksonville, Florida. Because no cancer was found in her spine, the radiation oncologist at UNC felt that proton therapy gave Hallie the best shot at maintaining her remaining “good brain” that the cancer left untouched in the initial resection.

The Friday afternoon before we left for Jacksonville, Hallie was at a rehabilitation facility in Charlotte, and I received a phone call from the case manager assigned to us by our insurance company. Our insurer was not going to cover Hallie’s proton radiation therapy. My heart sank. I’m sure I did a poor job maintaining my composure for the rest of the phone conversation. I immediately called the radiation oncologist at UNC to tell him what the insurance company had told me. He interrupted me.

“Both St. Jude and Dana-Farber came back with their second opinions. They don’t believe Hallie has an ependymoma. They think it is a high grade astrocytoma-glioma.”

He added that the new diagnosis was worse than the old diagnosis and that, for Hallie, it was no longer a question of survival; it was now about longevity and quality of life.

Of course, we did move Hallie to St. Jude, and she was treated under the premise she had a high-grade glioma. Oddly enough, about three months later, I got a call from the radiation oncologist we were supposed to see in Jacksonville. He said that his pathologist thought Hallie’s tumor was an ependymoma. I couldn’t understand how there could be so much disagreement over Hallie’s tumor.

Fast-forward one year. After Hallie had been off treatment for five months, her tumor came back. This time, it was resected at Le Bonheur Children’s Hospital in Memphis. St. Jude’s pathologist said the new tumor looked like her original tumor. They called it an astrocytoma-glioma, but with the caveat that it had some ependymal qualities. After the reappearance of the tumor, Hallie underwent radiation for the first time. As I write this, and, as far as we know, she has been cancer-free for four and-a-half years. She’ll actually go back next week for her MRI checkup.

Almost two years ago, I received a call from Hallie’s oncologist, Dr. Giles Robinson, at St. Jude. He told me he had Hallie’s original tumor methylation-tested. Of course, I asked him what methylation testing was? “Think of methylation as a way of getting a tumor’s genetic finger print,” he explained. “It can be run against a database to tell what type of tumor yours is.”

Through the testing, he discovered that Hallie did not have an ependymoma, or a high-grade glioma. Her tumor belonged to a newly discovered separate entity of brain tumors.. He called her tumor a High Grade Neuroepithelial Tumor with BCOR alteration (HGNET-BCOR). At the time he made this discovery, Hallie was only the fifteenth known case in the world.

Today, thanks in part to this new way of testing tumor tissue, many more kids who have Hallie’s same tumor have been identified. In fact, St Jude hopes to soon launch methylation testing for brain tumors as a standard test that can help diagnose unusual cases like Hallie’s. But, because this tumor is so rare, doctors do not yet know how to correctly treat these HGNET-BCOR tumors. Even so, using Hallie’s experience as a guide, Dr Robinson has been prescribing radiation sooner after surgery in newly diagnosed children such that they may be spared a return of the tumor after months of chemotherapy. However, we still have a long way to go to understand and treat these complex tumors. Our job here at Press On is to offer funding and support for the researchers, like Dr. Robinson, who are on the front lines, making new discoveries every day.