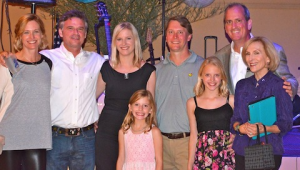 It is Friday morning, exactly one month since the Play for Press On tournament in Augusta. Thirty days ago, I woke early and jumped in with a literal army of compassionate volunteers who had taken a day of their lives to pull off this event. In its second year, it has already been ingrained as simply a fun and good thing to do. Obviously, many close friends and many new friends, who have been affected by Brennan and Patrick’s uniquely beautiful and tragic journeys, have been moved enough to create this very impactful and compelling event in our little hometown.

But this Friday, there was no rushing out to the golf course to set up signs, fill coolers, and set up PA systems. Today is a holiday of sorts for our boys, with St. Mary’s parent-teacher conferences underway. The extent of our stress upon getting everyone dressed was a trip to Krispy Kreme for Hot Donuts Now. Brennan, is seated in the front with me, dressed in an oversized Play for Press On tee shirt. Christopher and his buddy Atlas are in the back seat playing a game and giggling as we joke with the lady at the drive through window. Pulling out onto Washington Rd, we turn the radio to a country music station, which switches songs from a Brad Paisley classic to what the boys and I call “County Rap,” distinguished by a urban doom-chucka-chucka beat glazed with a country twang. Not having grasped a feel for this new sound, I switch over to the Rock station. It’s the Beatles playing “Something.”

Driving east back towards North Augusta, we squint in the the early sun. Brennan turns to me knowingly and happily says, “now this is a good song.”

I reached over, ruffled his hair and smiled. I don’t know why, but this comment made me so happy inside.

Brennan got to hear a lot of music during his four years in and out of the hospital. Good music (by my definition) was a fundamental part of the day every day for Brennan, piped in through an I-Pod in his hospital room or in the car as we would drive around town and observe the outside world through our little mobile environmental bubble. He didn’t have a lot of interaction with people outside of immediate family and medical personnel. But he was given an opportunity to learn a lot, and grow up at a pace that (while seemingly unfair) geared everyone in our family down to a pace that was unhurried and real. With uncertainty screaming in our faces every day, there was calmness and certainty in our commitment to love each other, a lot.

There are still a few checks in the mail for this year’s Play for Press. But without a finally tally, it seems pretty certain that we will net around $130,000 for this one event, setting us up to reach our yearly fundraising goal of $500,000+ and our total research investment to over $2 million in three years. People give us a nickel, and we invest a nickel. It’s as grass roots as you can get. There are trials underway and drugs available and kids living because of Press On and its unbelievable success.

But as we pull into the neighborhood, having turned off the radio and placed the I-Pod on Beatles only, feeling how close these boys are to each other, I look back to the past month not with so much pride for the Press On Fund’s financial contributions to the fight against pediatric cancer, but to its impact on so many people who have stepped back a few paces, hugged their kids a bit longer, and listened to the music of their own lives. It is an identical feeling to the days when we experienced the reality of thousands of people praying and meditating around the world for the miracle of a cure. While hard to explain, to me it represents the greatest gift of Press On and the beauty of friendship.