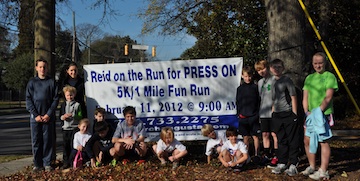 Press on to reach the end of the race and receive the heavenly prize for which God, through Christ Jesus, is calling us.

The verse from Philippians sums it all up for the Press On Fund mission.   The “race” itself is self-evident.  Like hundreds of thousands of families throughout the United States (and the world) the Simkins and Chance families have fought, and continue to fight, the race against childhood cancer, specifically neuroblastoma and AML.   And today, volunteers, donors, friends and family continue to develop tools with which the Press On Fund can compete in this Race.

Reid Memorial Presbyterian Church in Augusta is one such institution which has embraced the cause, and acknowledged the gravity of this fund’s effort and achievements to date with the most appropriate of Fundraising plans: the “Reid Memorial 5K/One-Mile Fun Run to help raise funds for researching childhood cancer.”

“We are so proud and excited,” says event coordinator and Reid member Sterling Ivey.   “In mid-January we had raised over $5,000, and this was even prior to having any runners register,” she noted.  The race itself is Saturday February 11.  Registration begins at 8 am.  Participants can register up through the day of the race.   The proceeds for this inaugural event go directly to Press On and to Reid Memorial Church’s Children’s Ministries.

Brennan Simkins will be in the “Pace Car” at the start of the race, and his father and brothers will run in both his name and in the name of Patrick Chance.   “This is our first organized event since Patrick’s passing and will be a very meaningful and emotional occasion,” says Press On co-chairman and father of Brennan, Turner SImkins.

“Pardon the pun, but the running-thing has really taken off for Press On,” says SImkins.    “People are running marathons, triathlons and organizing events like this all around the country for Press On,” he says.   “A lot of people have run the various national Leukemia/Lymphoma Society runs in Brennan’s name, which has been a terrific honor.   But now most of these people who run again realize they can raise the funds directly for Press On, where 100% of the proceeds are invested in Cures for to the two of the most deadly pediatric cancers, neuroblastoma and AML, thanks to CURE’s generous management of this fund.”

“There are a lot of good folks out there,” he says.  “We are proud to Press On in our mission as they Press On for it.”