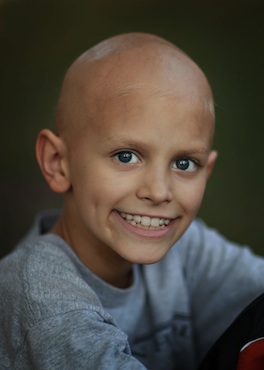 Patrick Roberts Chance, 9, of Atlanta, Georgia, and Cashiers, North Carolina, passed away on January 9, 2012, his ninth birthday, after a valiant battle with childhood cancer.  Patrick endured over five and a half years of continuous treatment led by a committed team at Children’s Healthcare of Atlanta with the assistance of other dedicated and loving professionals at the Children’s Hospital of Philadelphia and Memorial Sloan Kettering Cancer Center in New York City.

Patrick was a highly intelligent and curious child who could master complex Lego sets in record time.  He was an avid Star Wars fan and a mean shot with a Nerf gun.  He loved hunting, fishing, crabbing, and anything to do with the water or the mountains.  Patrick had an enormous grin and a dry sense of humor that kept his family and friends smiling even through difficult circumstances. He was the youngest member of the Nanuet Fire Department of Rockland County, New York, where he was inducted as an honorary member after capturing the hearts of the Nanuet firemen.  He was proud to be a real fireman and often spoke highly of his “brothers” at the fire station. He also frequently spoke of his “fishing buddies.” Patrick’s bravery, his faith in God, and his ability to enjoy life to the fullest despite his disease and noxious treatments have inspired many people throughout the world.  His sisters, Madison and Anna, enabled Patrick to live an extraordinary life filled with love, fun, adventure, and an appropriate measure of sibling strife.  The Druid Hills community and his friends and teachers at The Children’s School allowed Patrick to enjoy many glorious normal days.

We will forever be grateful to everyone who loved our son.  Patrick was born on January 9, 2003, at Piedmont Hospital in Atlanta, Georgia.  He is survived by his parents, Erin and Stephen Chance; his sisters, Madison and Anna Chance; his grandparents, Anne Chance, Ernie and Linda Reynolds, and Kris and Don Gordon; and many beloved aunts, uncles, and cousins.  In lieu of flowers, the family requests donations to the Press On to CURE Childhood Cancer Fund of CURE Childhood Cancer, Inc. via the website www.curechildhoodcancer.org or by mail to 1117 Perimeter Center West, Suite N-402 Atlanta, GA 30338.  Please note that the donation is for the Press On Fund.  Press On was formed by Erin and Stephen Chance when Patrick was first diagnosed and in partnership with the family of Brennan Simkins has raised close to a million dollars for childhood cancer research.