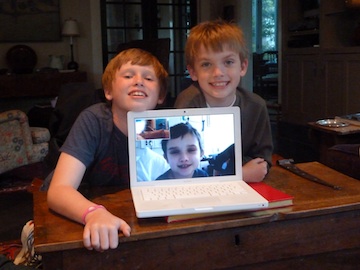 I guess we were expecting Brennan to catch a bug sooner or later. While endeavoring to plug as many holes in the bubble as we could, the bottom line is that: a) he’s a kid; b) it is approaching winter; and people are spreading germs left-and-right; and, c) the new immune system was bound to be put to a test someday.

That day came Saturday October 22, when following a lovely drive in the country with me and my parents, he told me that he was tired and wanted me to carry him inside so that he could sleep. When he rested his head on my shoulder, he was very hot.

A temperature of 101 clearly placed him above the 100.3 degree threshold that requires hospitalization, per standard instructions for transplant patients of any age. At 8 pm on a Saturday, I had him admitted at MCG Children’s Medical Center (now called the Georgia Health Sciences Children’s Medical Center, but that is way too long. i’ll just call it MCG). With fevers spiking into the scary range for the rest of the week, he remained in-patient there until last night, fighting what appeared to be viral symptoms. But, teetering between the realm of a standard immune response to a viral infection, to that of Graph Versus Host Disease (GCHD), yesterday his symptoms swung way towards the latter. Consequently he was air-lifted from MCG to St. Jude last night with Tara, for the sole purpose of keeping him at a full scale transplant center which deals with this type of disease day-in/day-out.

Just before melting into his bed with a fever on the afternoon of the 22nd, he was pridefully telling his grandparents about having been selected by the Today Show as a feature for their St. Jude Thanksgiving week special, “Thanks-and-Giving.” Filming was to have commenced next week in Memphis.

Well, he is in Memphis, but unfortunately we are there to deal with one of the more serious realities of life, post-transplant. The Today Show gig therefore, remains in flux; but it is nice to know that they all think highly enough about Brenny and about what they have accomplished with him to even be in the running. Currently, they are simply trying to get their arms around his situation, establish a game-plan and do their best to get him back on track and back home. We have no idea how long this will take. Clearly, this is really the only priority right now.

Tara has been working on a Carepage/Blog for a number of days, but with things changing almost by the hour, it has been hard for her to put a lid on it. This is forthcoming soon. In the meantime, he is in Memphis and I am headed there in the morning with the Brothers.

Keep your eyes peeled for Tara’s account of the full story. And please keep your heart directed towards the stars with positive intentions for Brennan. Being home for his first Thanksgiving in three years would be a huge deal. Thanks for your prayers and encouragement.