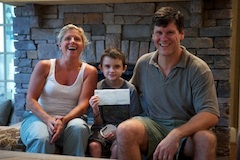 It started with a road trip back to Augusta from Brennan’s monthly visit to St. Jude when the cell phone rang, area code “404.”  Eric Ohlhausen was on the line.  “Turner, Eric and Katherine here.   Just checking to see if you were passing through Atlanta anytime soon, as we have something for Press On.

Merely a coincidence?  Through providence, we were, in fact, passing through Atlanta that weekend, and the entire family, including Brennan, was able to pay the Ohlhausens a visit.  As board members and past co-chairs of the Atlanta Charity Clays shooting tournament, the couple had included Press On as one of the event’s worthy beneficiaries.  Thanks to Eric and Katherine’s leadership, and the goodwill of the tournament’s many supporters, the Ohlhausens were able to personally hand Brennan a check for $25,000.  In doing so, they also delivered a poignant example of just how many people around the country are recognizing Press On as a meaningful and effective philanthropic investment.

“With both of my parents succumbing to cancer very close to one another, cancer research is something near and dear to our hearts,” says Katherine   “So with the Atlanta Charity Clay’s unique mission of raising money specifically for local children’s charities (the Press On Fund is a named fund of CURE Childhood Cancer located in Atlanta), and given our family’s long-time friendship with the Simkins and our concern for Brennan, supporting a cause so closely affiliated with him was an easy decision.”

Atlanta Charity Clays is an affiliate fund of the Greater Atlanta Community Foundation and produces an annual charity event for shooting and field sports enthusiasts.  Held every March, ACC has supported Atlanta-area children’s charities the past twenty-one years.

Thank you Eric and Katherine, and Thank you Atlanta Charity Clays, one shining example among many Pressing On for a CURE.