September 30, 2011 has been designated as the official Press On Day to CURE Childhood Caner. Please take a moment to read up on all the momentum behind the multiple fundraisers planned for this special event.

On a day dedicated to raising money for childhood cancer research, several area schools and businesses will hold fundraisers Friday to reach a goal of $100,000. Press On Day will help the research fund inspired by childhood cancer patients Patrick Chance, of Atlanta, and Brennan Simkins, of Augusta. 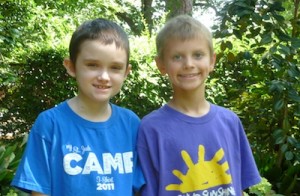 The events held on the last day of September will conclude Childhood Cancer Awareness Month but also motivate people to continue raising funds throughout the year.

People from Augusta and across the country who have followed the stories of the two cancer patients have raised money for a cause they believe in and want to support, Tara Simkins said. After the success of last year’s drive, many people said they wanted to make this year’s event even bigger, she said.

“It’s the grass-roots nature of it where everyone feels empowered to go out and do their own thing,” she said.

Students from St. Mary on the Hill Catholic School will exchange donations for the chance to dress out-of-uniform for the day. Hull Barrett, an Augusta law firm, will also hold a casual dress day for their employees.

Click here to read the full article: The Augusta Chronicle