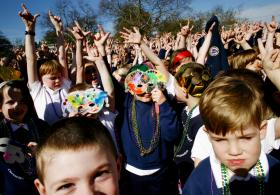 Pupils gathered for a yearbook photo display a sign language gesture for &quot;I love you&quot; and wear beads they bought for 50 cents. The bead sale raised $465 for families of ill children. Kendrick Brinson/Staff

Pupils gathered for a yearbook photo display a sign language gesture for “I love you” and wear beads they bought for 50 cents. The bead sale raised $465 for families of ill children.

On Monday the eighth-grader at St. Mary on the Hill School got a buzz cut to show support for first-grader Brennan Simkins, who was recently diagnosed with leukemia.

“I wanted to do it for him,” Luke said. “This shows that guys can be guys, and they’ll do pretty much anything for each other.”

More than 80 boys at the Catholic school on Monte Sano Avenue had most of their hair cut for Brennan. Though girls chose not to cut their hair, many wore beads in honor of Brennan.

He began chemotherapy in late January after being admitted to Medical College of Georgia Children’s Medical Center with symptoms of lethargy and high fever. He was soon diagnosed with acute myelogenous leukemia, a cancer of the blood and bone marrow, according to MayoClinic.com. He will now face months of chemotherapy and await a bone marrow transplant, said Assistant Principal Joe McBride.

“It was a way for us all to have solidarity with him,” Mr. McBride said. “He’s a kid, and he’s losing his hair. We can’t be there with him, but we’ll be bald with him.”

Kindergarten teacher Kathleen Wilkinson, who teaches Brennan’s younger brother, Christopher, said she introduced the idea of the children wearing beads for Brennan. The school sold more than 900 sets of beads Tuesday, she said. The $465 raised will be donated to the families of sick children at MCG.

Nicholas Navarre was one of the more than 450 students who posed for a school yearbook photo displaying a sign language hand gesture for “I love you” in honor of Brennan.

“I just wanted to lift up his spirits,” Nicholas said. “I want him to feel better. We’re praying for him.”